Who cares for students? 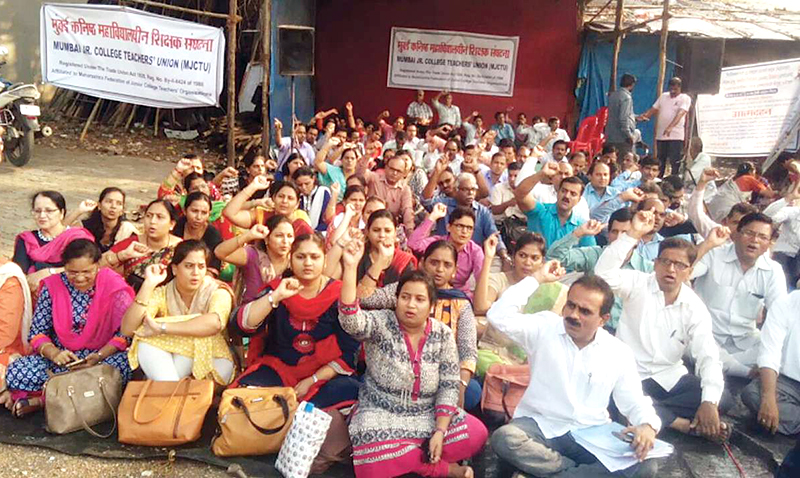 The Mumbai Junior College Teachers’ Union (MJCTU) affiliated to the Maharashtra State Federation of Junior College Teachers’ Organisation (MSFJCTO) assembled on a hunger strike again from March 27, and decided to not send the assessed HSC Board answer sheets to the state board until government issues a resolution accepting all their demands. Amidst this conflict between teachers and the government, the future of the students is at stake and such dilemma is not happening for the first time in the state. Chaos surrounding the delay of Mumbai University results that came to light last year also raised many eyeballs. This raises questions whether the state government is making enough efforts to upgrade an obstacle-free career for students!

A large number of teachers including 72,000 in the state and around 15,000 from Mumbai were on agitation boycotting the paper assessment when the HSC exams had commenced, that is on February 21, 2018. They decided to call off the strike on March 5 after the government assured to accept few of their demands.

The demands which weren’t accepted by the government are — a pension scheme for teachers who joined after November 1, 2005, and aid to teachers working for unaided institutions. In a meeting on March 27, Education Minister Vinod Tawde promised the agitating teachers to grant three of their demands within two days including the issuance of No Objection Certificates (NOCs). The Minister’s assurances also include — the clearing of pending salaries of 171 teachers who have been working since 2003 and other 600 teachers across the state who were recruited in 2012 but did not have NOCs.

Few other demands such as, recruitment of more teachers in junior colleges as well as in schools, making the information and technology (IT) a government aided subject, allowing teachers with 24 years of experience to be qualified for the selection grade, and the implementation of old pension scheme which remains pending for long.

Congress spokesperson Sachin Sawant expressed that the government should look into this matter immediately. He further stated, “This is an unfortunate situation for teachers to go on a hunger strike. Currently in Maharashtra, teachers are in a bad condition! As said, a state can never survive or develop if its teachers are not in comfort. It seems teachers are suffering more since the last three and half years of BJP government. The most important is to consider the future of the HSC students.”

Echoing the recent happenings, the last year’s delay in releasing Mumbai University final year results also made enough hullabaloo. In the meantime, students had to the pay the price as their further admission procedure got affected. If the government won’t pay heed to the current situation, the HSC students will also have to go through the similar crisis.

Sangeeta Kulkarni, a Professor of Tolani Junior College of Commerce expressed, “As the demands are not met even after verbal assurances, we need a written approval from the government this time. The junior college teachers shouldn’t have a separate pension policy. Why teachers’ demands are not being paid attention and they always have to suffer from injustice!”

“Due to this agitation, the HSC students should not suffer to get their results on time, so we need to prioritise the future of students. Government has funds for all the section of society but not for the teachers and it is high time for us to unite and develop mutual understanding with the government to resolve our problems,” she added.

With the ongoing protest, the future of the HSC students is being jeopardised. Now, the time will tell whether the government will take any steps for the better progress of students in the state and not make them the victim of any government-teachers conflict hereafter!

Ritish Acharya, a HSC student said, “We are waiting for our results; if this issue doesn’t resolve, it will create a lot of problems for us as we might lose opportunities to get admission on time in good colleges.”