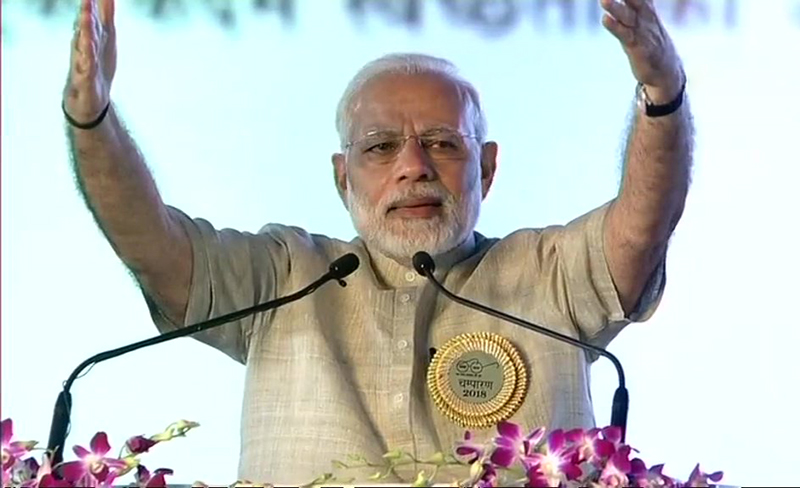 Prime Minister Narendra Modi on Thursday said that the Congress government in Karnataka is in ‘sleep mode’.

Continuing his tirade against the Congress party, the Prime Minister said the ruling party did not spend the funds, the Centre had allocated for development of Karnataka.

Addressing a public gathering at Karnataka’s Ballari, the Prime Minister said, “Congress government in Karnataka is in ‘sleep mode.’ They didn’t spend funds Centre allocated for development of the state. We wanted OBC Commission to get Constitutional status but they didn’t let it happen. They do vote-bank politics. They divide people on basis of caste.”

He said, “Look at the rising illegal mining in the state. The Congress government here couldn’t even frame a strong mining policy. Karnataka has a ‘Sidda-Rupaiah Sarkar’. It has created a debt-burden for the state.”

Hitting out at former Congress president Sonia Gandhi, Prime Minister Modi said that she had promised Rs 3,000 crore package for Ballari but forgot about it later.

Prime Minister Modi said, “Congress leader Sonia Gandhi had promised Rs 3,000 crore packages for development of Ballari when she fought from here but once the Congress came to power, she forgot about it.”

The Prime Minister also stated that the Congress has ruined the rich history and legacy of Ballari region of the poll-bound state.

Karnataka will go to polls on May 12 to elect its representatives for the 225-member assembly. The results will be out on May 15.