More than a year after India’s fight against COVID-19 began, the virus is spreading faster than ever before and appalling stories of distress are being reported from across the country. The pandemic has disturbed the lives of everyone, especially the most vulnerable section of our society. Teachers have had to undergo salary cuts, many parents have not been able to pay the school fees due to job losses. For low-income households, the challenge is accentuated further. With classes going online, thousands of children have had to scramble for gadgets to get online. The digital divide has never been more obvious, resulting in several kids dropping out of school.

In Madhya Pradesh, which is battling the second COVID wave like many other states, several shocking incidents have come to the fore in the last few days. In the latest incident, CCTV footage recovered from a government hospital in Shivpuri, about 300 km from state capital Bhopal, has led to a probe into a coronavirus patient’s death as his family alleged the oxygen supply was stopped by the hospital staff. The hospital administration had earlier denied any lapses. The COVID patient’s son said he was with his father till 11:30 PM on Tuesday. Hours after he left for home, he received a call from the hospital mentioning his death.

West Bengal Chief Minister Mamata Banerjee blamed the BJP for the resurgence of COVID-19 in parts of the state and said had the government vaccinated everyone in time, there wouldn’t have been this second outbreak of the pandemic. Speaking at an election campaign rally at Jalpaiguri in north Bengal on Wednesday, she attacked the BJP, without naming the party, for importing the virus into Bengal through the hundreds of “outsiders” it was bringing into the state for election campaigns.

Mumbai hospitals will use luxury hotels to treat COVID-19 patients with milder infection, the city’s administration said today as it tried to ramp up facilities for patients needing critical care with cases shooting up. Two hotels will start functioning as extensions of private hospitals from Thursday. Private hospitals will tie up with four-star or five-star hotels to accommodate more patients and those not needing critical care are likely to be moved from hospitals to hotels. Doctors have to approve such transfers.

A retired soldier suffering from COVID died without any treatment at a hospital in Bihar, as the hospital authorities were busy preparing for the visit of the state health minister Mangal Pandey. Vinod Singh died in the vehicle he was brought to the Nalanda Medical College and Hospital. The authorities did not admit him despite his family’s repeated requests.

Hundreds of thousands of people continued to throng to the Kumbh Mela in Uttarakhand’s Haridwar as officials said the religious gathering will not be cut short due to the rising COVID cases and that it will continue till April 30.

In Uttar Pradesh’s Varanasi, the district administration has appealed to both domestic and foreign tourists not to come to the city till the end of April due to the rise in COVID cases. Varanasi logged 1,585 cases on Wednesday and has over 10,000 active cases, the third-highest in Uttar Pradesh after Lucknow and Prayagraj. Uttar Pradesh’s CM, Yogi Adityanath suffered from COVID soon after taking the first vaccination.

Maharashtra, Delhi, West Bengal, Gujarat, Karnataka and Madhya Pradesh are among the states where doubt mutant strains were found, sources said, adding that these mutants are playing a role in the rapid rise in COVID-19 cases. However, it cannot be said that double mutants are 100 per cent responsible for the rise in cases, sources in the ministry said. A “double mutation” is when two mutated strains of a virus come together to form a third strain. The one reported in India is the result of the E484Q and L452R strains combining. The L452R strain is found in California in the United States and the E484Q strain is indigenous.

Madhya’s Pradesh’s Tikamgarh municipality has converted a garbage truck into a hearse to ferry unclaimed bodies to the crematorium, sparking outrage. The municipality’s action drew widespread condemnation after a video of a body being carried in the “modified” vehicle on Thursday evening went viral. Tikamgarh’s chief municipal officer (CMO) Vijay Shankar Trivedi, however, defended the civic body’s ingenuity saying since the vehicle was not being used for collecting trash, it was utilised for carrying bodies as the civic body did not have a ‘Shav Vahan.’

Madhya Pradesh Minister Prem Singh Patel on Thursday delivered a shocker on deaths from coronavirus in the country and said that while nobody can stop the virus deaths from occurring, “people get old and have to die”.

As India is witnessing a massive surge of COVID-19 cases, many migrants, fearing a complete lockdown like last year, are returning to their home states. Uttar Pradesh’s additional chief health secretary on Thursday issued directives for the migrant workers coming to the state.

The state government has asked district administrators to prepare a list of all migrant workers which will have their addresses and mobile numbers. The district authorities have been asked to take every worker’s signature against the details. 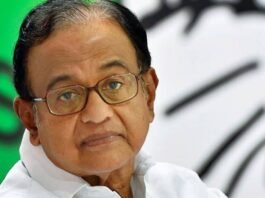